Cycling is a fun sport, but it can also be dangerous from time to time. Cyclists use bicycles to get around town, race in events, commute to work, or just cruise different scenic spots. Not only can cycling be an effective way to exercise and experience adventure, but it can also be relatively inexpensive — unless you’re involved in a cycling crash.

Certain injuries are common for cyclists and there are a ton of bicycle crash statistics as evidence. Explore the most common types of cycling crash injuries and how to prevent them.

WARNING: Some of the content below describes bodily injury. Use discretion before proceeding.

Collisions with cars, trucks, and even parked vehicles can lead to serious damage to your body and your bike. Before we look at the injuries themselves, let’s take a look at how cyclists are injured on the road.

Cyclists grazed by cars or vehicles have been what’s considered to be “clipped.” A truck that’s too close to the bike lane or a turning car failing to yield are common clipping culprits. A clip might result in scrapes, a slightly damaged frame, or some light bruising. In other cases, a clip can leave cyclists feeling traumatized or with broken bones.

Getting clipped is different from other types of traffic accidents because they don’t always result in injury — but it’s best to visit a medical professional even if you don’t feel like you’ve been injured or traumatized. An unaddressed cycling injury can lead to expensive medical bills down the road or serious medical complications.

Drivers who aren’t paying attention can rear-end cyclists sharing the road — especially at night when visibility is low. A rear-end can cause back and neck injuries, not to mention some expensive bicycle repairs.

If you’ve been rear-ended in a bicycle accident, it’s important to:

As well, you may be eligible to file an injury lawsuit depending on the event details. Browse your local law firm listings to find a team of attorneys who can help get you compensation for the accident.

Getting hit by a turning vehicle

Cars turning left and right may not always yield to cyclists. These types of accidents usually involve an aggressive driver, or an impatient driver trying to “make the light” and cut ahead of a crossing cyclist.

Turning vehicle crashes can result in injury along the side of the body, and even a head or neck injury. Similar to getting rear-ended, if you’ve been struck by a turning car, seek medical assistance right away and consider whether hiring an attorney is right for you.

If you’ve purchased a bicycle insurance policy that covers medical payments and bike replacement, file a claim and include all accident details. Your insurance benefits will help cover the costs in the meantime.

Drivers and passengers have been known to throw open a car door directly in the path of a moving cyclist. Whether you’re riding at high speeds or just cruising along, a sudden obstacle in your path can cause injury.

Cyclists may crash directly into the open car door or swerve around it into another parked car, newspaper stand, or another obstacle on the street. Bruises, broken bones, and other serious injuries can result from an open-door collision which is why it’s best to get medical attention immediately. Now that we’ve discussed the most common ways for a cyclist to crash, let’s cover the resulting injuries. Before we get started, it’s important to note that there are plenty of injuries not listed below. If you’re currently injured because of a bicycle crash and don’t see your particular injury listed, visit a doctor anyway.

Cyclists who’ve been struck by a moving vehicle or involved in a traffic-related collision may have a head injury. Common types of cycling head injuries include:

These types of head injuries can lead to memory loss, changes in cognitive processing, and even death. Wearing a helmet when you’re riding greatly reduces your risk of serious head injury and can prevent a premature fatality.

Also known as a bone fracture, broken bones are another type of common cycling injury and include:

As well, cyclists can also dislocate bones during a crash. Elbows and shoulders are joints frequently dislocated in a cycling collision. A dislocation can lead to torn muscles and ligaments which is why it’s important to get checked out by a doctor or team of medical professionals after a bicycle crash even if you don’t feel you’ve broken anything.

When cyclists make contact with the pavement during or after an accident, the skin can be scraped, cut, or otherwise wounded.

When gravel, dirt, sweat, or debris makes its way into the open wound, the skin can get infected. In some cases, skin lacerations may even require stitches.

A car crash can cause serious dental injury to cyclists. Either making contact with the ground, with the bike frame, or with the vehicle, the teeth can be chipped, missing, or cracked.

A mouth injury can be incredibly painful and expensive to resolve, especially if you don’t have health insurance or bicycle insurance that covers medical payments.

The head, neck, and spine work together to support the human body in complicated ways. If you’ve been struck by a car or involved in some other type of crash, it’s critical you stay as still as possible if you think you have a head, neck, or spinal injury.

Numbness, difficulty moving, or intense pain may signal a spinal injury which can result in long-term paralysis. Again, if you’re ever in a cycling accident, get medical attention immediately.

Accidents, injuries, near-death experiences, and even close calls can result in psychological trauma for cyclists. After a serious accident, many cyclists may experience difficulty getting back on the road due to PTSD or riding anxiety.

Cyclists may seek medical and psychological assistance to cope with the aftermath of a serious accident or injury in the hopes of riding again or simply processing the event.

Quick tips on how to prevent bicycle injuries 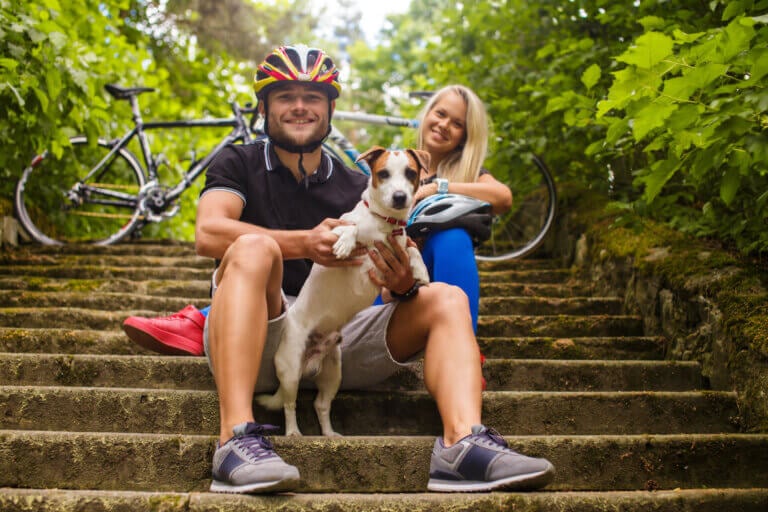 How bicycle insurance can help if you’ve been injured

A stand-alone bicycle insurance policy can help cover medical payments in a qualifying event. If you’ve been injured, file a claim with your bicycle insurance company and talk to their representatives about benefits.

Simple Bike Insurance offers policies starting at just $100 a year and you’ll get to decide how much you want to insure your bicycle for. Get started today with an instant quote or contact us if you have questions about coverage, benefits, or claims.